Beverly Bring Your Own Bag is an ad-hoc group working on educating Beverly communities on the effects of single use plastic, including ways to reduce our waste. Specifically, BBYOB advocates using reusable bags over single use plastic ones from stores. The effort began in 2017 when Brittney New and I started workings at Salem Sound Coastwatch’s internship. We were inspired by a 2016 project when another high school student successfully started Salem’s plastic bag reduction, that just went into effect in January 2018. Our small committee formed of teachers, artists, and concerned citizens formed into BBYOB when we decided to take the idea on for Beverly.

Since then our group members have presented to the City Council multiple times and hosted events for education. Some of these have been a free showing of the documentary Bag It at The Cabot, Tidal Shift, and Question & Answers with the Mayor. 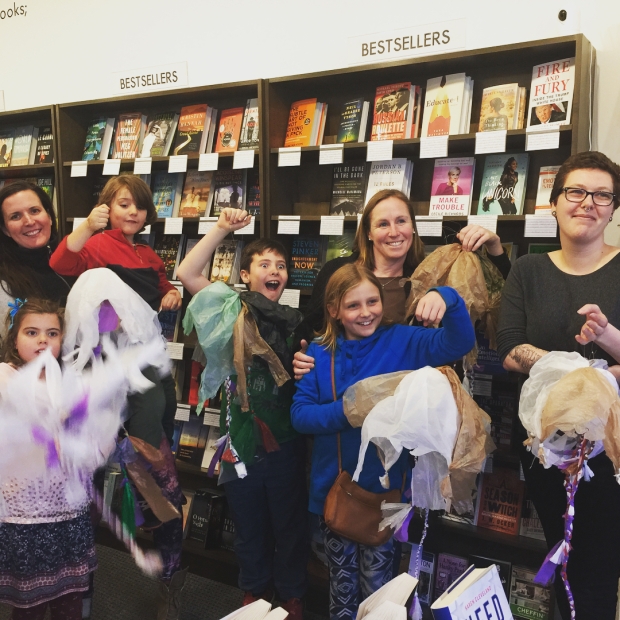 Tidal Shift is a participatory community art project run by Claudia Paraschiv of Studioful Design making jellyfish out of plastic bags. Our goal of over 200 jellyfish will be suspended for Beverly Arts Festival over Ellis Square. During these workshops, we talk about how in the ocean sea turtles eat plastic bags as they resemble jellyfish. This is reasoning behind the project and helps expand onto other conversations between us and participants. Some of these have been how we haven’t always had plastic bags at our disposal. Or how they clog recycling units and need to shut down machines, be manually removed, and throwout. So far, we’ve done over 20 workshops with about 150 finished jellyfish made. We meet weekly at the Waring School Downtown on Cabot St from 5 to 7 pm, drop-ins welcome!

A year and a half ago, the state of California outlawed single-use plastic bags. Civilians and businesses “adjusted quickly” to the law, reported from LA Times. While there isn’t much environmental change to see there just yet, but Ireland also banned plastic bags ten years ago.  NY Times said this made people switch over to reusable bags and “you never see plastic” after since having a fee on them six years prior to their ban.  If our next door neighbor Salem and an entire island can adjust to the change, then we can too.

We’re excited the ordinance by City Councilor Estelle Rand is being presented to the rest of the council on May 21th. Following two weeks at their next meeting, they will vote on June 4th. Between now and then we are asking you to write to our city officials showing support of the ordinance. If anyone still has questions about any of our events or the ordinance, please message us on facebook.com/pg/BringYourOwnBagBeverly/.

Tidal Shift workshops at Coast to Coast Paddle, Chive Events, Cabot Street Books, Ladies Entrance Art Studio, and the weekly Monday workshops at Waring School Downtown – a big thank you to all of our wonderful hosts!

So far, we have about 70 jellyfish hand made by the Beverly community from used plastic bags. We’re hoping for about 150 for the installation during Beverly Arts Festival – so come help us make a big impact! Each jellyfish is made from an average of 10 single-use plastic grocery bags, although we use a wide variety of single-use plastic bag types: newspaper bags, cereal liners, produce bags, bread and veggie bags, frozen food bags, and anything you can ultimately braid!

A lot of conversation is happening about what more we can do since banning single-use point-of-purchase bags is a great start, but just the beginning. What is your vision for a more plastic-free world?

We have lots of workshops in April at local establishments throughout Beverly from shops to artists studios and churches – drop on in! Check out the CALENDAR for more updated workshops.

In collaboration with City Councilor Estelle Rand and the Bring Your Own Bag Beverly Ad Hoc Committee, Tidal Shift is beginning an educational campaign around a eliminating single-use plastic bags in Beverly, MA.

Tidal Shift is a community project that communicates the negative impact of plastic bag pollution in our oceans through large scale participatory public art installations. The project is an artful communication and educational tool as North Shore communities rally to adopt positive legislation to reduce single-use plastic bags.

While a lot of behind-the-scenes preparation has been happening for months, the public launch officially at Beverly City Hall on January 16th where the Ad Hoc Committee presented the many reasons to adopt new legislation to eliminate single use plastic bags in the city.

At this point, 61 Massachusetts cities, including Boston, have adopted plastic-bag reduction legislation. On the North Shore, Beverly would join many communities that have a integrated relationship with the water on their shores. Tidal Shift will conduct workshops for all ages during the next few months leading up to Arts Fest Beverly.

The project showcases a canopy of jellyfish made from used plastic bags to illustrate how marine life “sees” plastic bag pollution as food. This leads to the widespread ingestion of harmful plastic by sea creatures.

Tidal Shift jellyfish are easy and fun to create at workshops for all ages, at different venues in town from libraries and schools to cafés, restaurants, and shops. The community helps to create the canopy as they learn about the reasons for reducing single-use plastic bags in our community and oceans. Stay tuned for workshop times and locations!

A group show meant to inspire people to action. With grace, beauty and humor these artists use their gifts to raise consciousness about climate change, sea level rise, and ocean pollution. (from Flatrocks Gallery) 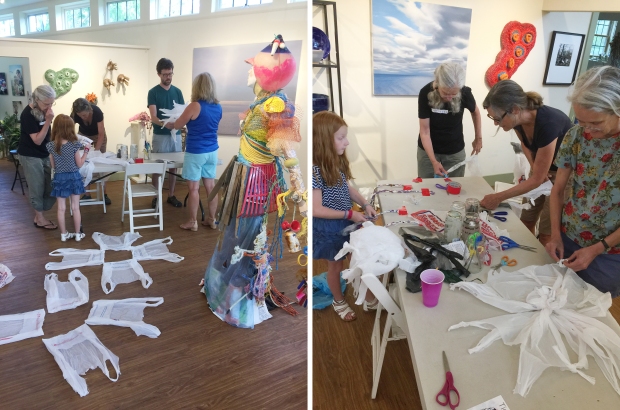 Like many cities around the North Shore, Gloucester is also thinking about adopting legislation to reduce the use of single-use plastic bags. Tidal Shift brings the expressive power of art to help communicate the importance of aligning our values for living with the appropriate legislation. Another small nudge towards a Tidal Shift!

The gallery was a meaningful space in which to create these plastic bag jellyfish, surrounded by powerful artwork like Karen Ristuben’s “108 Acidified Eggshells.”

TidalShift is up for The Salem Arts Festival in Salem MA supporting the City’s Plastic Bag Ban that commences on Jan 1, 2018. The statewide ban is almost here too! Join in for no plastic!

Tidal Shift supports new plastic bag reduction legislation on the North Shore,  and aims to illustrate the impact of plastic bags on our local marine life.